Destroyed water pipes, polluted waters, danger of an epidemic in the middle of Germany: The flood disaster in Rhineland-Palatinate and North Rhine-Westphalia caused by storm "Bernd" interrupted or even destroyed the disposal of wastewater and the supply of clean drinking water in many affected localities in July 2021.

The first responders in this emergency situation included not only the major well-known players in civil protection and disaster management, but also numerous smaller aid organisations. One of these is NAVIS e.V., an association from Moosburg in Bavaria specialized in drinking water treatment in disaster areas. The expert teams of NAVIS e.V., working on a voluntary basis, have been on site in many crisis areas of the world since 2004 to provide initial emergency aid in drinking water supply after floods.

The request for help from the inner-German crisis area in Rhineland-Palatinate reaches NAVIS e.V. in July 2021 immediately after the extent of the damage to the public drinking water supply network had become clear. Shortly afterwards, a first team travels to the district of Ahrweiler to support the Zweckverband Wasserversorgung Eifel-Ahr.

The four drinking water treatment units (TWA) in NAVIS e.V.'s luggage are provided by the company Kärcher Futuretech. The Schwaikheim-based specialist for mobile supply and protection systems has been one of the most important suppliers in civil defense and disaster control for more than three decades. The systems brought to the so called Ahrtal each have a capacity of up to 5,000 liters of fresh drinking water per hour and work on the principle of ultrafiltration. 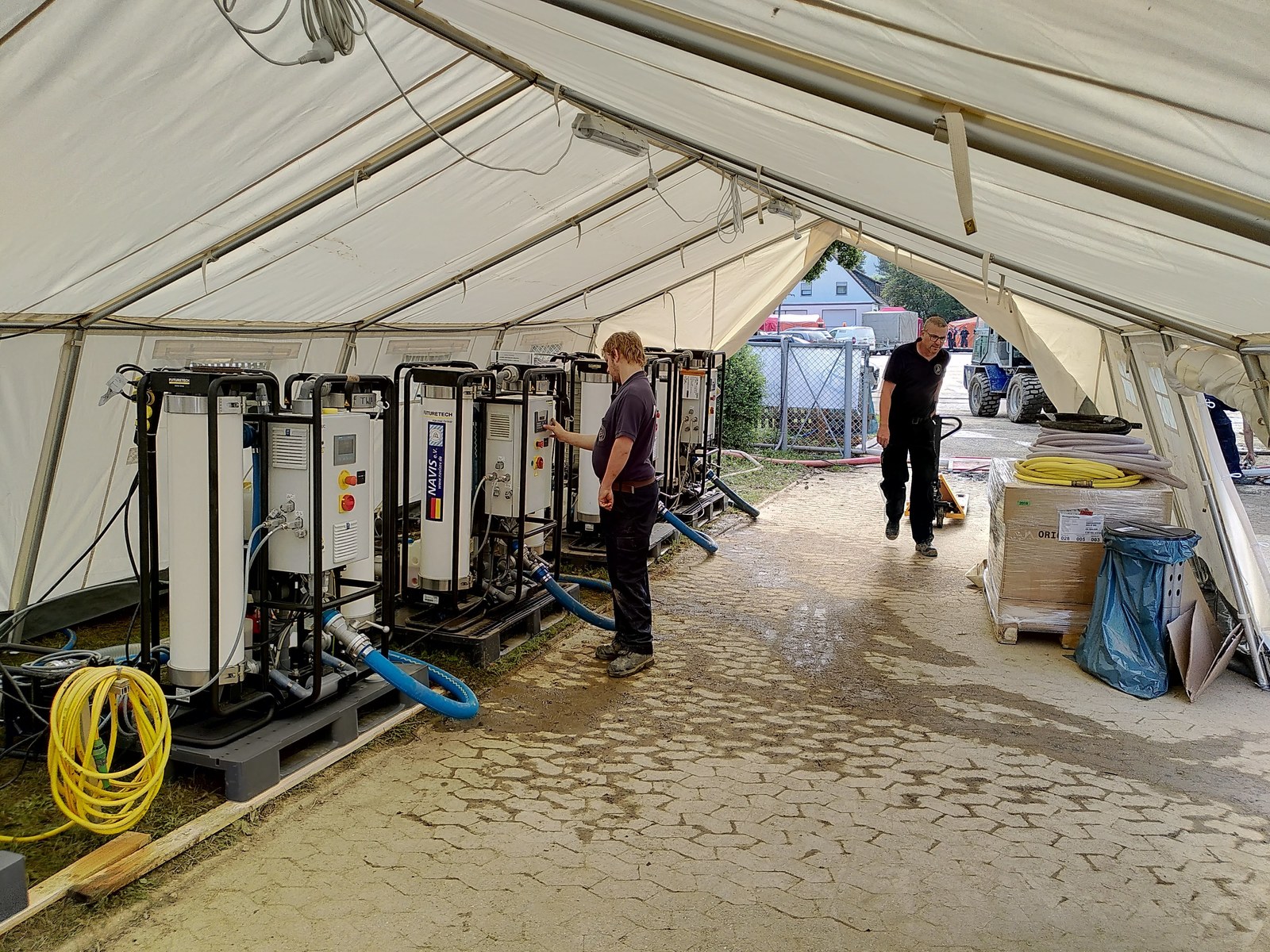 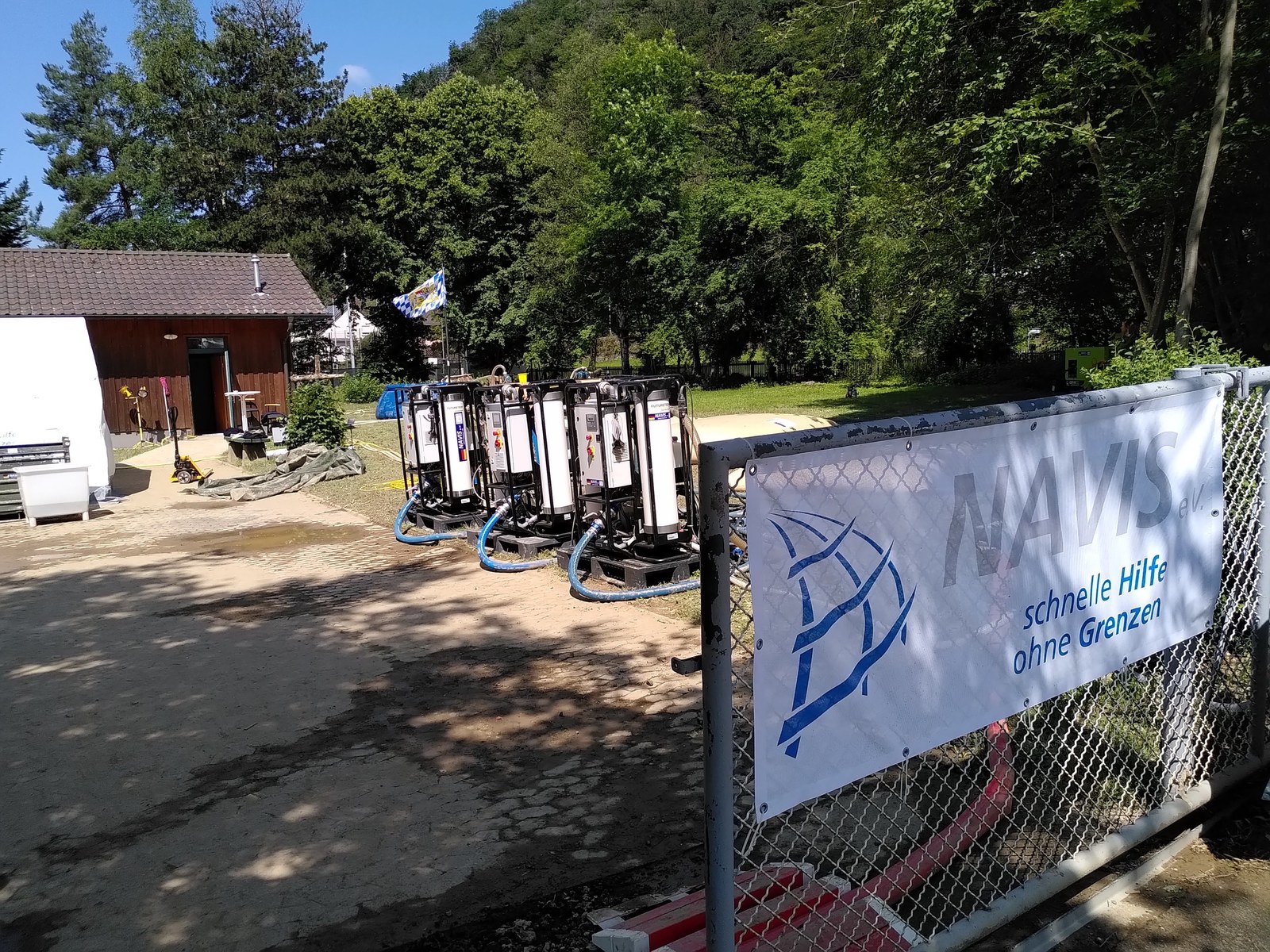 Even if the Moosburg emergency forces are familiar with images of great destruction from Asia and Africa - what they find on site in the damaged area leaves none of them cold. "Anyone who thought that the damage caused by such a flood would be less severe than in other countries was proven wrong. Even large buildings were washed out here with such force that they collapsed," summarizes NAVIS e.V. Chairman Wolfgang Wagner the first impressions of the helpers.

After a suitable site has been found as a base camp above Ahrbrück with the help of the local crisis team, helpers start commissioning the treatment plants. In addition to the four TWAs owned by NAVIS e.V., Kärcher Futuretech spontaneously provides a fifth plant to support the project. The daily production capacity thus reaches a quantity of 200,000 liters of drinking water per day.

The raw water for the drinking water production is initially taken from river water; later NAVIS e.V. can use to a nearby spring. Several channels are quickly established for distribution: From a tank on the site, residents can directly tap fresh drinking water in 10-liter tanks. A shower line is also set up, where the many private and professional helpers who have arrived for clean-up work can take a warm shower. However, as testing of the local water pipes progresses, the produced drinking water can also be fed into the still intact sections of the Ahrweiler district drinking water network. "When the water suddenly comes out of the tap again instead of the canister - in a situation marked by collapse this can already make a psychological difference for those affected. This can give confidence that things will gradually get back in order," says Wolfgang Wagner. Villages that are still cut off can be supplied with tankers and fire engines.

Despite the state of emergency in the base camp of NAVIS e.V., the daily tasks of maintenance and cleaning of the facilities and the solving of smaller and larger problems have become something like everyday life, the repair work on the public drinking water network in the district of Ahrweiler is also progressing.

The municipality informs the residents on its website that already in the end of August, the regular operator in Ahrbrück hopes to be able to take over the water supply again. Addressed to NAVIS e.V., they once again say "many, many thanks for the professional and uncomplicated help".

For the helpers of NAVIS e.V. a special mission will then come to an end. In their own country, in familiar structures and without the need for interpreters. Wolfgang Wagner: "We have experienced great gratitude on site. Our helpers are called water angels from Bavaria. They would like to pass some of this on to all the donors, through whom our work is exclusively financed." NAVIS e.V. is working in Ahrbrück with a commodity value of 750,000 euros and is still dependent on financial donations.